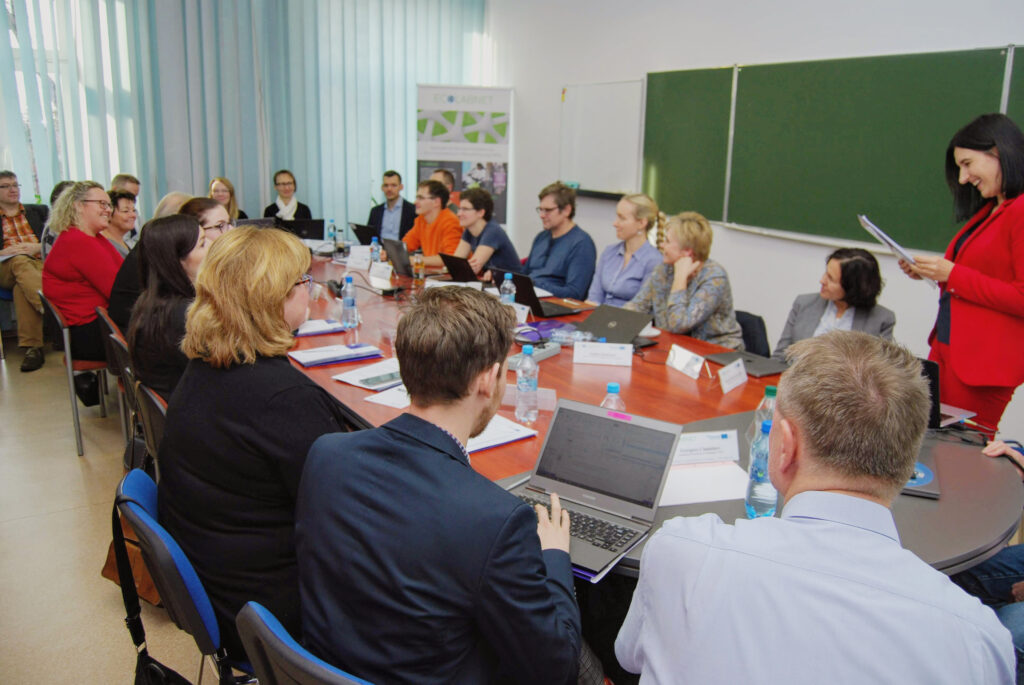 On October 27-29, 2019 in Czestochowa, the second working meeting of the ECOLABNET Network of Service Providers for Eco-innovations in Manufacturing SMEs project, implemented as part of the Interreg Baltic Sea Region program, aimed at creating a network of service providers supporting ecological innovations in manufacturing SMEs from the BSR took place. The meeting was organised by the project partner Czestochowa University of Technology.
The meeting was attended by representatives of the following project partners:

On the first day of the meeting, which was organised at the Faculty of Environmental Infrastructure of the Czestochowa University of Technology, the CUT partner presented the competence of the working team and showed the equipment of laboratories and the university’s infrastructure. The project coordinator (MUOVA) characterised the current status of the project. There was also a workshop session, during which the results of surveys conducted among SMEs and intermediary organizations were discussed (VIA & LBC).

On the second day, the meeting participants were hosted by the Faculty of Management of the Częstochowa University of Technology, during which subsequent workshop sessions took place. The first workshop led by MUOVA concerned further analysis of the survey results in the context of SME respondent profiles and intermediary organisations. The second workshop included the presentation regarding mapping the tools, laboratories, and networks for ECOLABNET (UTart). During the workshop led by Centria and VU, members of the project teams also actively participated in the presentation of prototypes ideas, where five best of them were selected. The next two workshops concerned the discussion and characteristics of the digital cooperation tools (CUT) and the external cooperation model (VIA), during which many interesting opinions were exchanged and many valuable ideas were collected for the next stages of the project.

After the substantive part, the participants of the meeting participated in a guided tour to the Sanctuary of Jasna Gora, where they could admire the sacral architecture of the Pauline Fathers Monastery, among them an impressive collection of books, the oldest of which come from the 15th century.

In the evening there was a gala dinner, during which the participants exchanged insights and comments from the workshop meetings. In addition, the activities undertaken until then were actively discussed and the schedule of future project meetings was established.

The participants spent the last day of a very fruitful meeting at the headquarters of ELQ S.A. After presenting the company’s business profile, a workshop on the strategy and development of the ECOLABNET network was held, led by the LBC team. After the workshop, the MUOVA project coordinator summarised the meeting and discussed the next steps on which project teams should focus, including preparation of the annual report.

After the summary, the president of ELQ S.A. Marcin Sołtysiak invited meeting participants to take part in a study visit at the company’s production hall. It was a good opportunity to learn the secrets of transformer station production, design and construction of solar farms and electric vehicle charging stations.

After a joint lunch, the participants set off on a return journey, hoping to meet again in Lithuania, where as early as April 2020, the next working meeting of the ECOLABNET project teams will take place.